I think that government throughout the world is fundamentally broken. I don’t see how the current governments out there can possibly be fixed or refined. I think they’re too far gone. They’re not really competing with each other primarily because it’s too difficult for individuals (the customers of government) to switch governments. They’re also too big for individuals to really have a significant impact. Put a few million people together and you get a government that no one is really happy with. Government becomes the legal way for people to take other people’s property and to force others to act the way they’d like.

In America today, there are a ton of groups who think they can do a better job but have very little hope of America ever really reflecting their values. There are libertarians, environmentalists, Christians, Muslims, liberals, neo-conservatives, and anarcho-capitalists. That’s just naming a few of the groups who will never really see their ideas for government really enacted.

So if you’re in a hopeless group and you’d actually like to implement your ideas, what are you to do? At this point, all people can do is whine, complain, and dream. They never really do anything. They often talk about it, write about it, call their representative about it, and hope for a different future. Sure, some do become activists and have some slight impact.

I’ve been one of those whiners by having this blog. One could write a blog entry about each of the laws in this country explaining why it shouldn’t be the way that it is. Many whiners, complainers, and dreamers eventually resort to contemplating the creation of their own nation. It’s been tried many many times by many people. All of the attempts have had one important thing in common. They’ve all failed. Miserably.

That’s about to change. 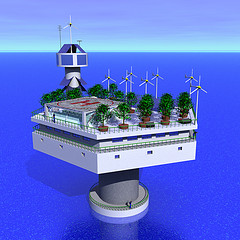 I think that Seasteading will become a reality. I think it’ll be the first nation creation idea that will actually work. I’ve read their book. I’ve read every entry on their blog. They have an impressive plan. I didn’t know that it was possible to create a floating structure that doesn’t rock with the waves. I’d really like to see this in action. If this works, it changes everything. It could actually make governments more competitive since it gives people more of an opportunity to vote with their feet.

I love that they’ve learned from all of the failed attempts. I love their incremental approach. It’s the same approach I use to create software and websites. I think they’re brilliant and I’d like to invest large quantities of cash in this new way of life.

UPDATE: This multi-page summary of seasteading could be a good place to get some more background.